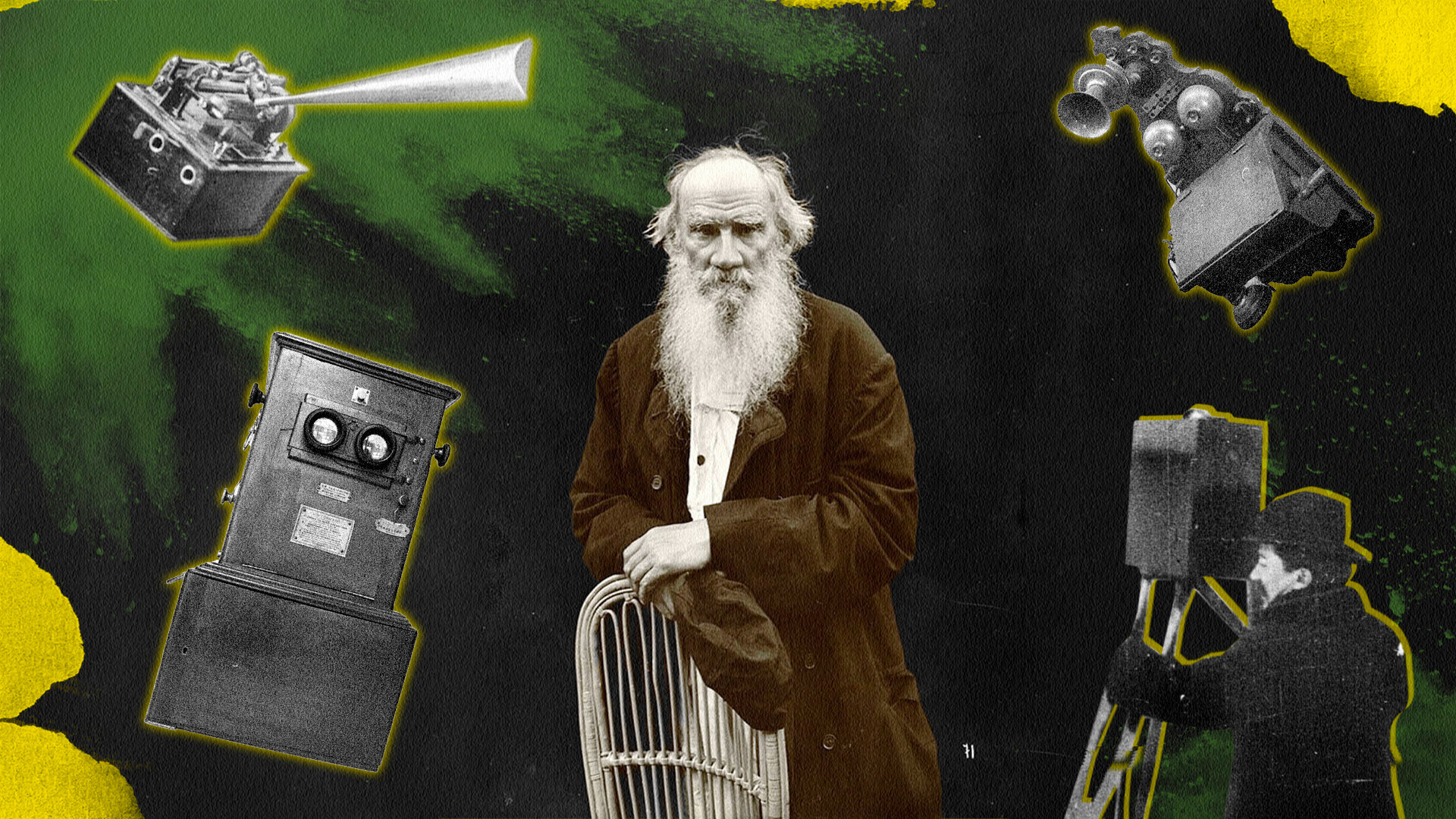 Russia Beyond (Photo: L.N. Tolstoy State Museum; Biswarup Ganguly)
The great Russian writer enjoyed taking pictures, listening to music on a gramophone, and talking on the telephone. Still, he could not conclude with certainty if the technological revolution was a good thing or not.

Having lived to the age of 82, Tolstoy’s life crossed the turn of the 19th and 20th centuries, which was an era of industrialization and technological progress. His life coincided with the emergence of railroads, photography, cinema, devices that record and play sound, typewriters, and, of course, electricity.

He was able to experience all these inventions for himself. What did the great Russian writer and thinker decide about these innovations and their usefulness? Was he amazed by them or not; and did he think they were an important part of mankind’s advancement?

Tolstoy was almost the same age as this invention and was very excited about the first photographic experiments. In 1856, Sergey Levitsky, who is considered the father of Russian photography, made the first photos of Tolstoy, which were printed on paper. Here, the still very young writer is depicted alone and in the company of other authors who wrote for the popular literary magazine, Sovremennik. They are Ivan Turgenev, Ivan Goncharov, Alexander Ostrovsky and others. 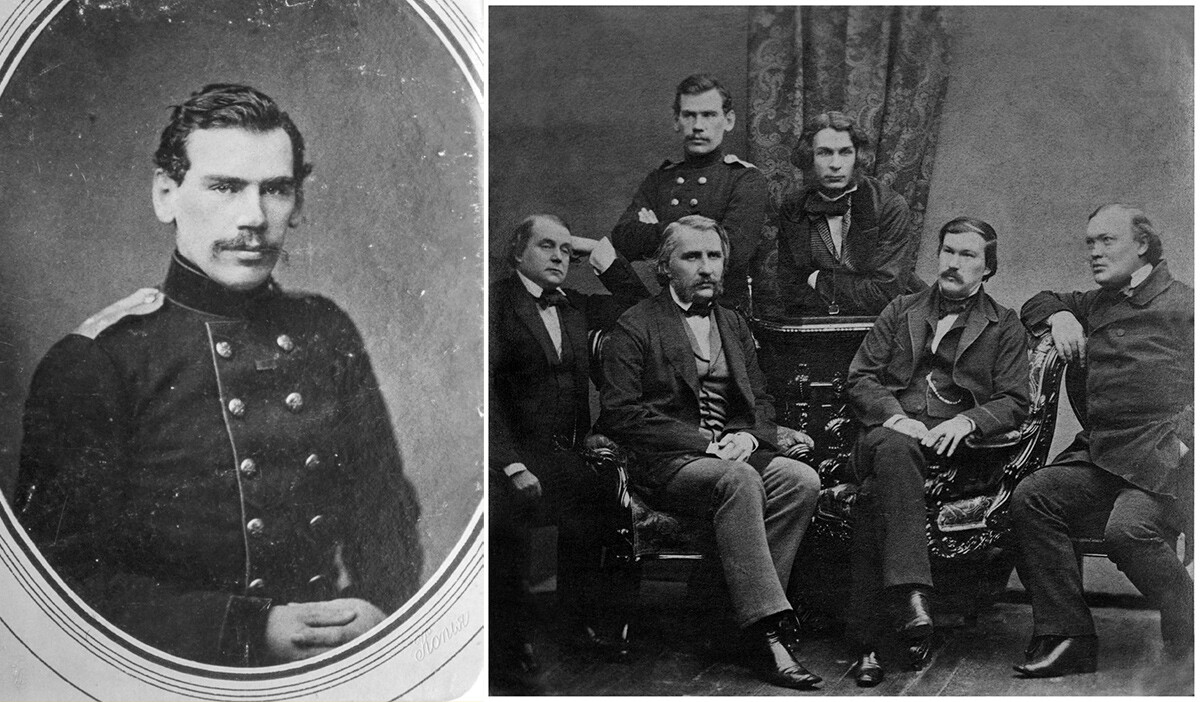 Young Tolstoy and other authors of the 'Sovremennik' magazine, 1856

Later, Tolstoy visited photography studios and took formal portraits, which basically were the  first “business cards” that he even attached to letters when exchanging photos with his pen pals, such as Alexander Herzen. The photo below was taken by the photographer Géruse in Brussels in 1861. 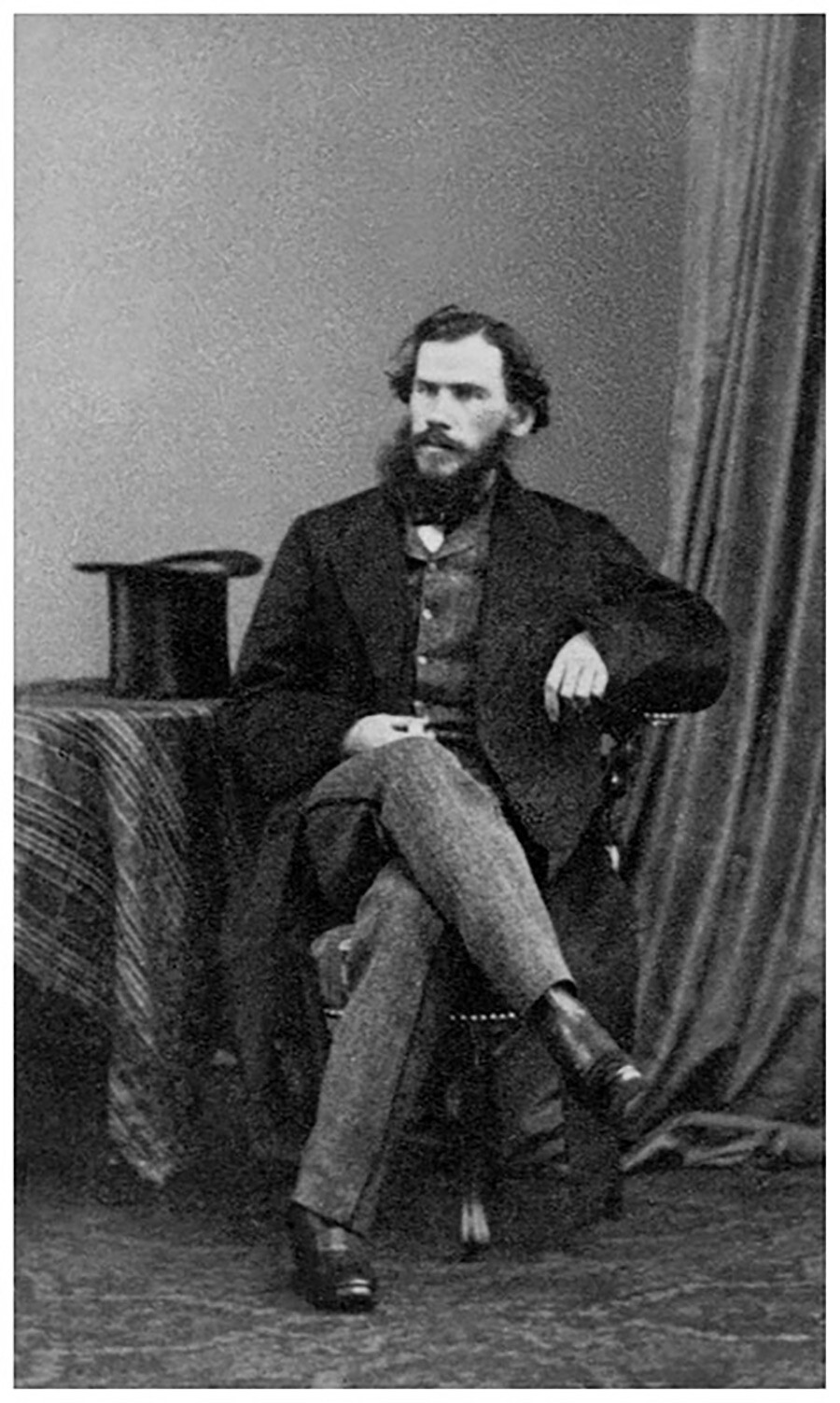 Tolstoy in Brussels, 1861. Photo by Géruse

In 1862, Tolstoy took his first self-portrait. To make such a ‘selfie’ he had to harness two horses to drag a huge and heavy camera. His wife, Sofia Andreyevna, signed the card, “I took a picture of myself.” 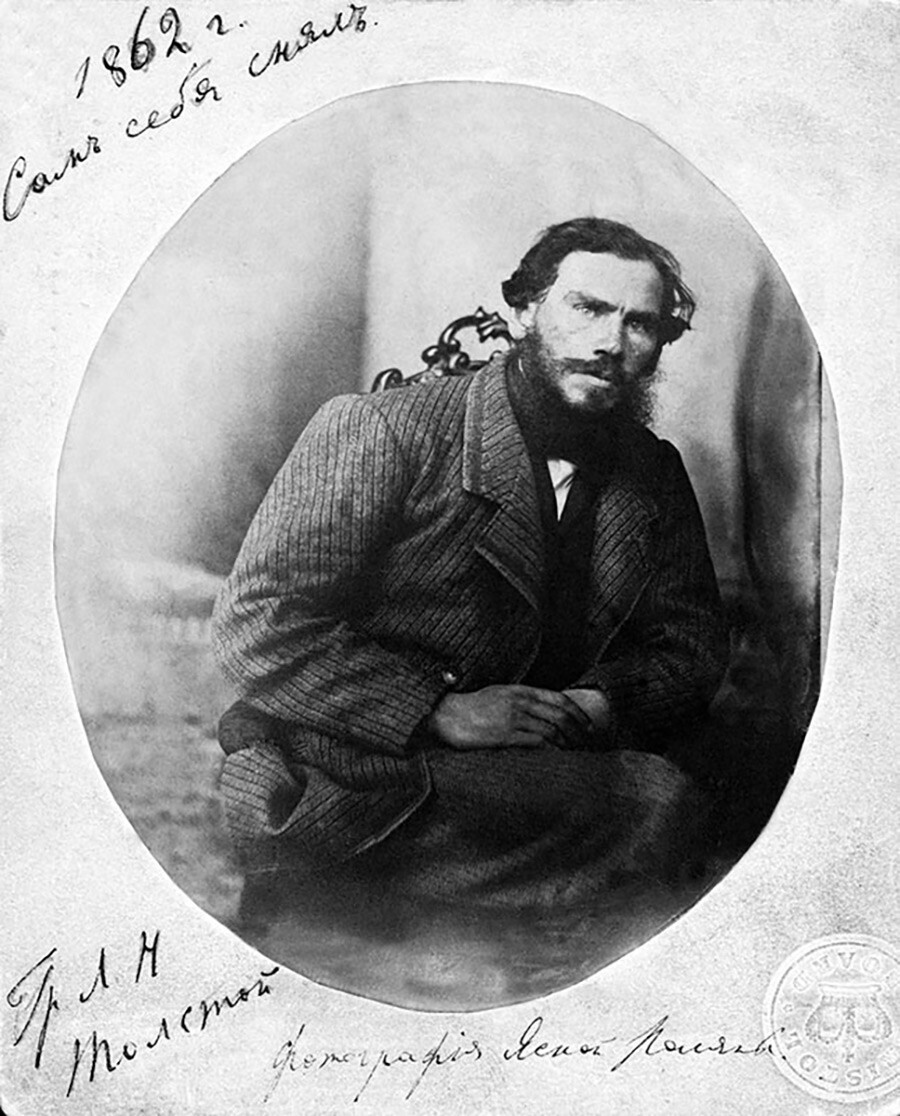 Photography became an obsession for Tolstoy, and even today, no writer's archive can boast of so many pictures. In many ways Tolstoy's wife helped to feed his passion for photography. She was also very fond of taking photos and it was her preferred hobby for more than 20 years. She even developed the film herself. 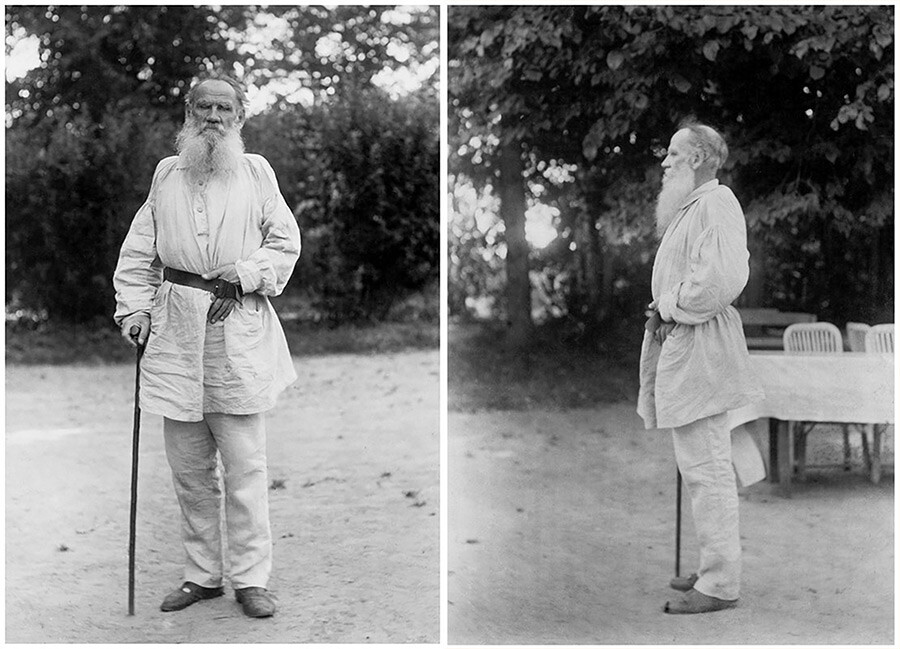 Tolstoy in Yasnaya Polyana, 1897. Photo by his wife Sofia

An entire series of psychological portraits was made by Tolstoy's secretary and friend, Vladimir Chertkov. In them, one can glean the writer's vivid emotions. These are some of Tolstoy's last photos, taken in 1910, and turned into GIFs by the State Tolstoy Museum.

However, fascination turned to irritation: in 1903, Tolstoy wrote to his friend Stasov that it was “terribly unpleasant” to pose for photographs. He saw something harmful in being captured on film, something that massages one's ego and leaves an inferior feeling.

When photography began to grow in popularity in Russia at the turn of the 19th and 20th centuries, many photographers sought to capture fleeting moments in time and leave a record for posterity. Tolstoy was, of course, one of their main topics of interest. One amusing photo shows an “attack of the photographers” (below), in which several photographers lined up to take photos of Tolstoy. 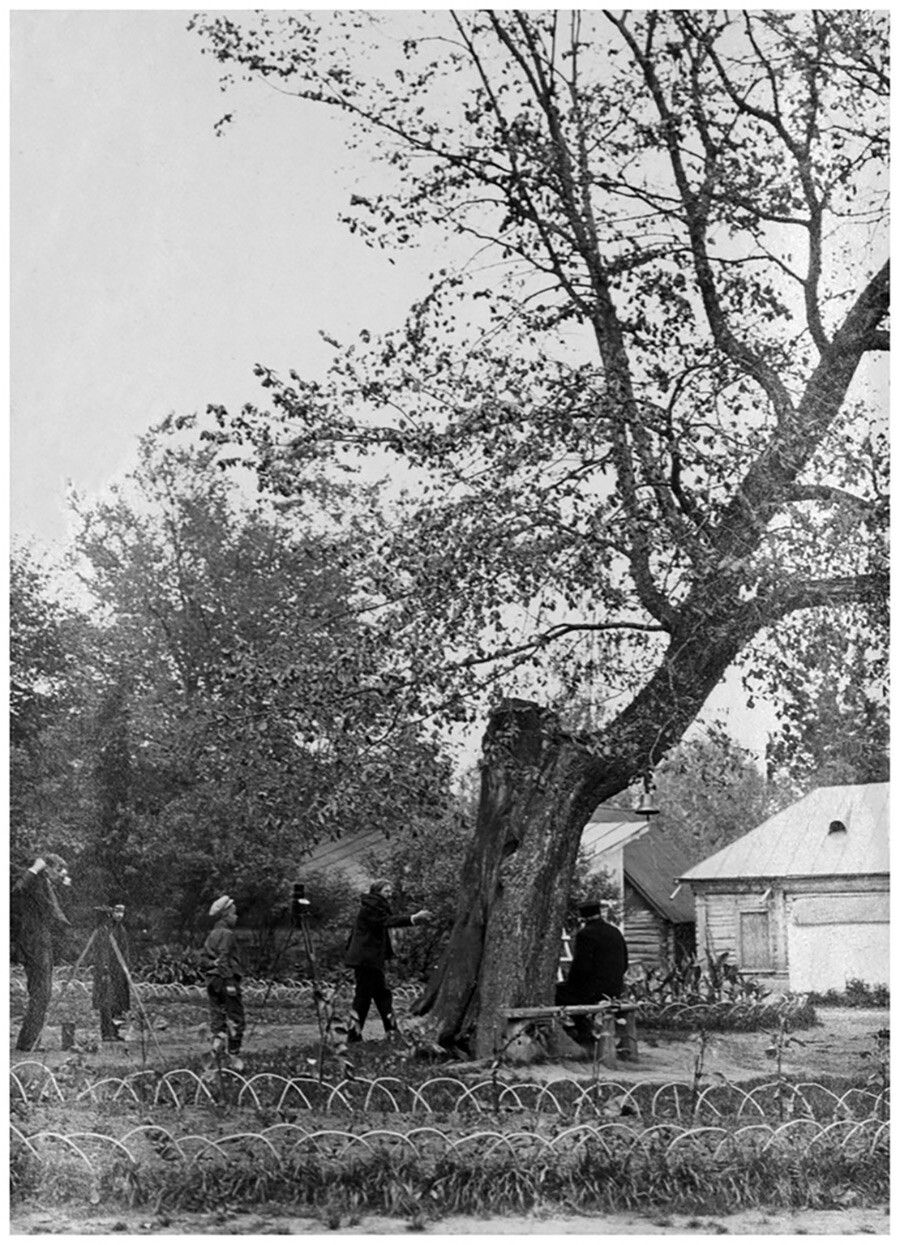 An attack of photographers: P.Kulakov and S. Prokudin-Gorsky taking pictures of Tolstoy, 1908. Photo by P.A. Sergeenko

The Russian pioneer of color photography, Sergei Prokudin-Gorsky, traveled all over the empire, taking pictures of buildings, churches, and people. He also visited Tolstoy, who of course was a living Russian legend. Here's the only color photograph ever made of Tolstoy. 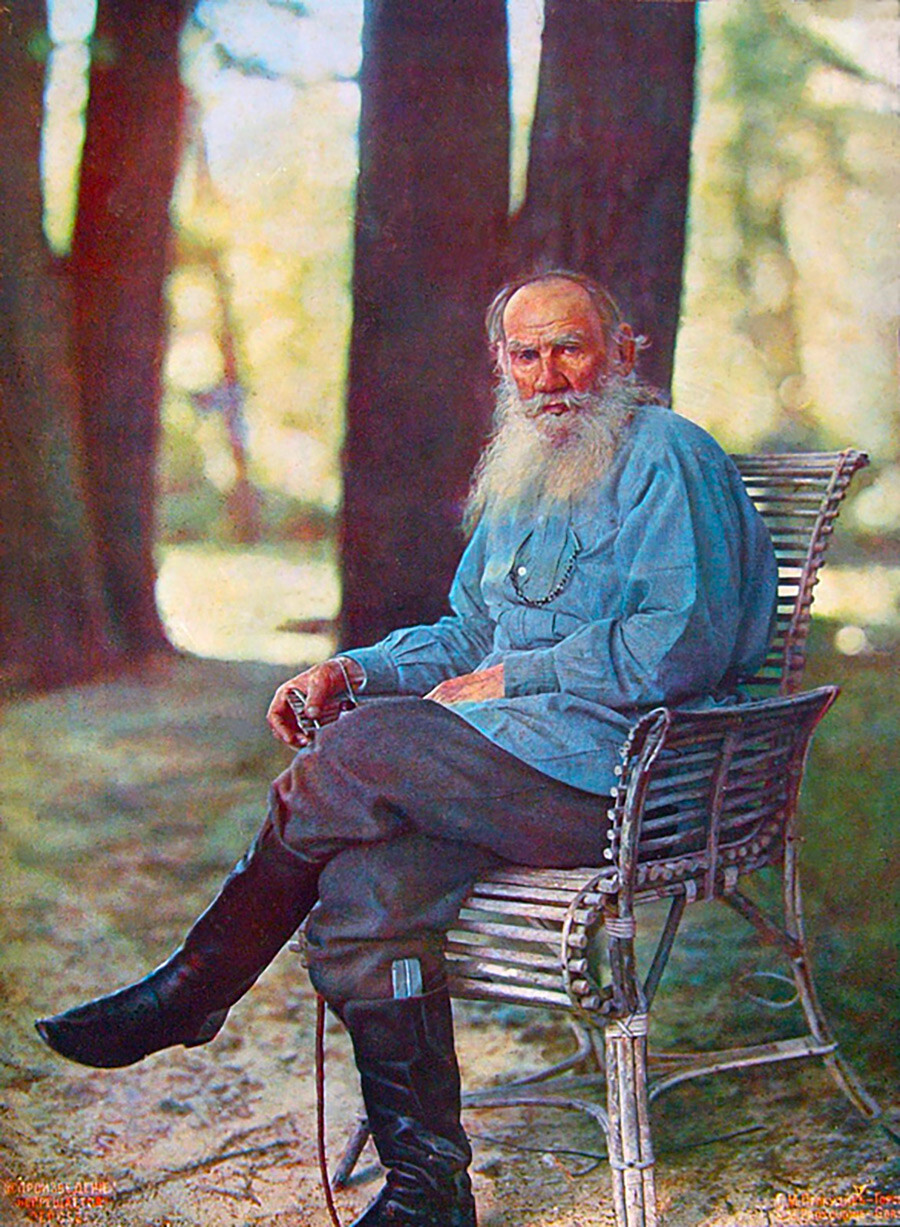 Not only photos, but also film footage of Tolstoy in the last years of his life have been preserved to this day. Much of this footage was made at the writer's Yasnaya Polyana estate - Tolstoy strolling around, spending time with his family, as well as footage of his daughters and peasant children.

The footage shows what a star the writer was. A huge crowd of people met him at the train station when he arrived in Moscow. At the gates of his Moscow house admirers were also waiting for him. Everywhere Tolstoy went, people gathered to catch a glimpse of him.

Tolstoy appreciated the power of video. “Ah, if I could now see my father and mother as I see myself!” the writer said after watching footage of himself. Later, in an interview with the newspaper Vecherny Peterburg (Evening Petersburg), he noted that “it was interesting to see oneself almost alive: one is almost split in two.”

The author of War and Peace was also concerned about the moral aspect of progress. He concluded that technical development is necessary only if its purpose is to benefit mankind.

“When people’s lives are immoral and their relations are based not on love but on egoism, all technical improvements, the increase in human’s power over nature: such as steam, electricity, telegraphs, all kinds of machines, gunpowder, dynamite, robulites - give the impression of dangerous toys placed into the hands of children,” Tolstoy wrote in his diary in 1903. 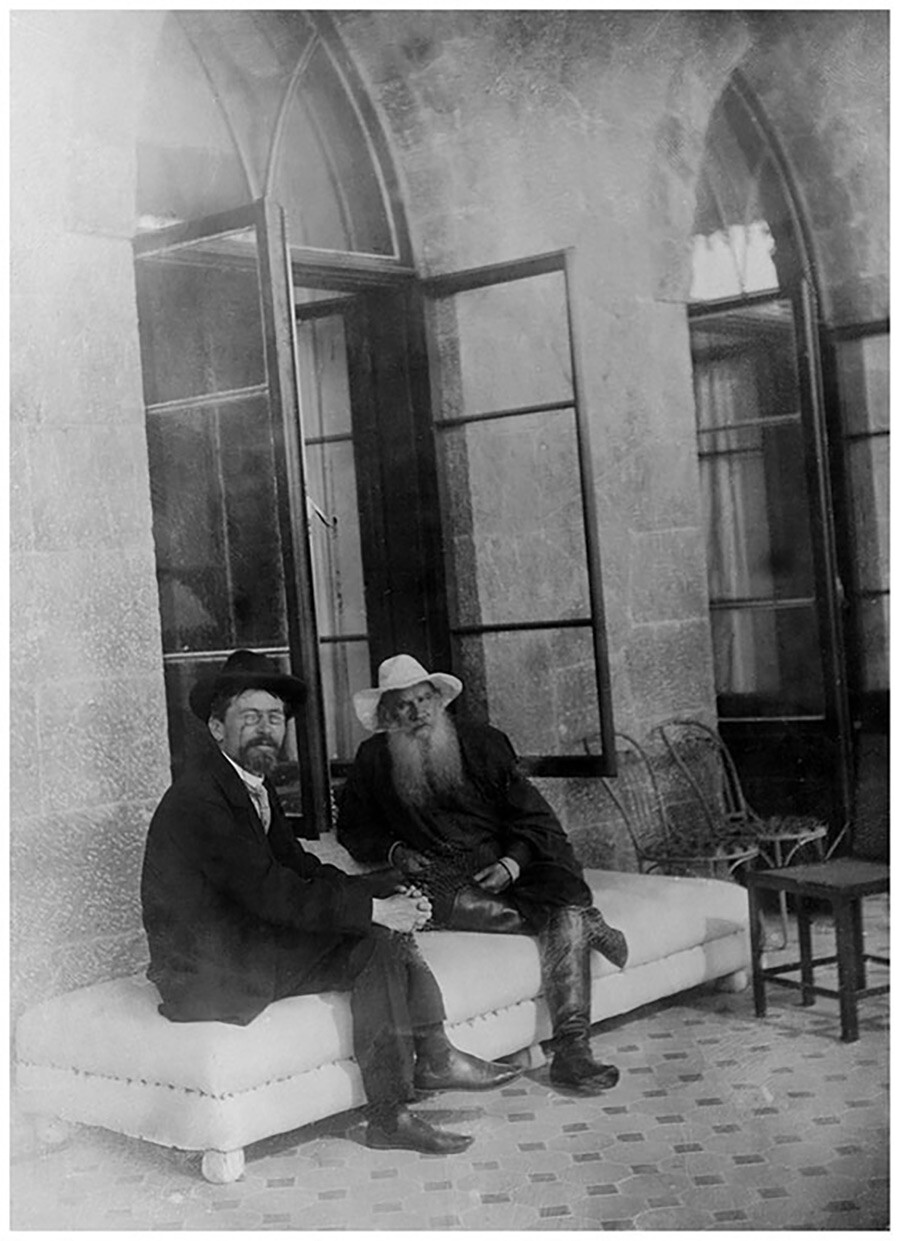 “Just talked IN the phone with Leo Tolstoy,” Chekhov wrote to his wife in 1901. In turn, writer Maxim Gorky, who witnessed the telephone conversation on the other side of the wire, recalled that Tolstoy shouted into the phone with delight: “Today I have such a good day, I feel so happy, that I want you to be happy, too. Especially you. You are very good, very good!” 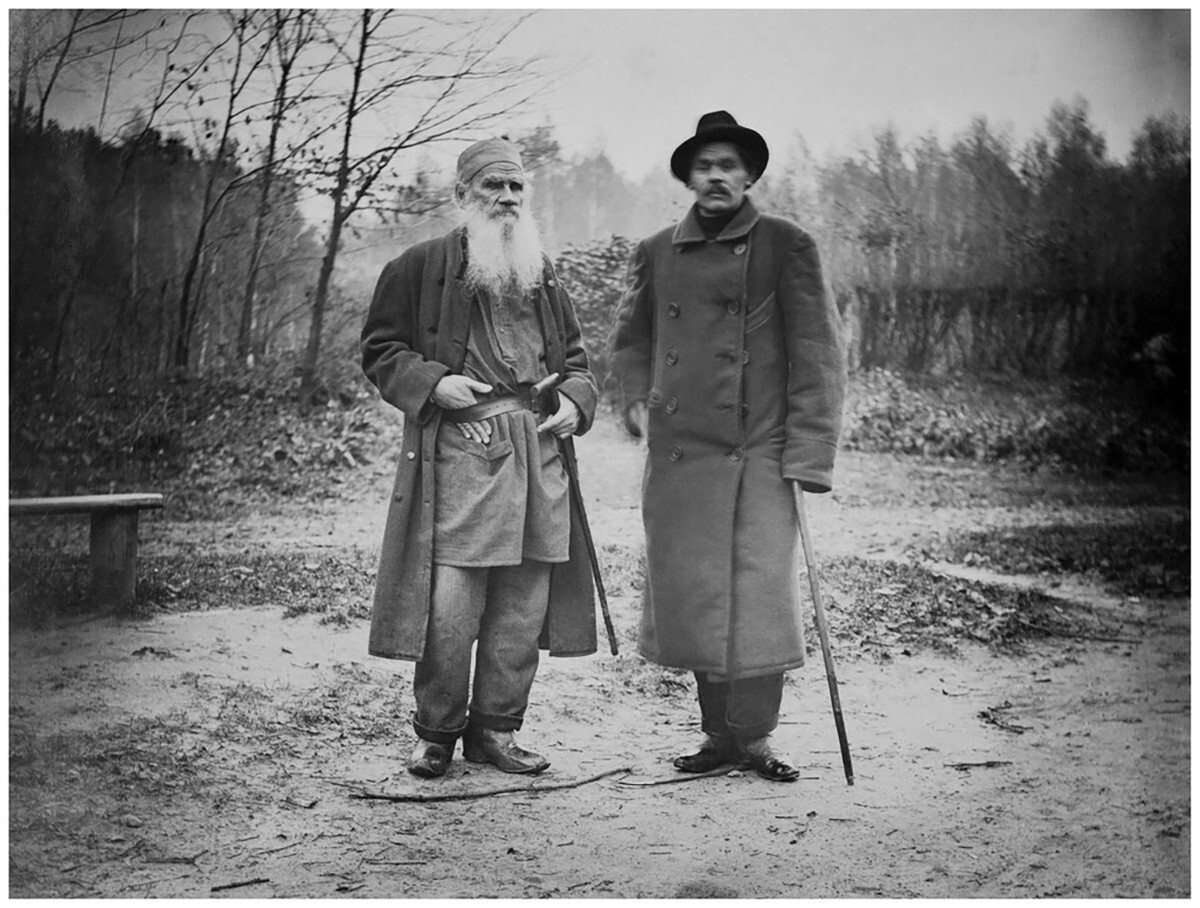 Starting at the end of the 19th century, Tolstoy also was an avid user of the telegraph. He himself sent a few telegrams, unlike his wife, and in turn received countless messages from various parts of the country.

Tolstoy being Tolstoy, however, began to reflect on the novelty of the telegraph and its social impact - he was concerned about inequality.

“We speak of the progress of electric telegraphs. Obviously, the benefit and application of the telegraph is only for the upper, so-called educated class. The people, 9 of 10, only hear the humming of the wires…” Tolstoy wrote in “Progress and the Definition of Education”.

When watching films, Tolstoy regretted that sound was missing in order to give a fuller picture and closeness to events and life. He didn't live long enough to see film with sound, but he had the joy of using the phonograph and gramophone. 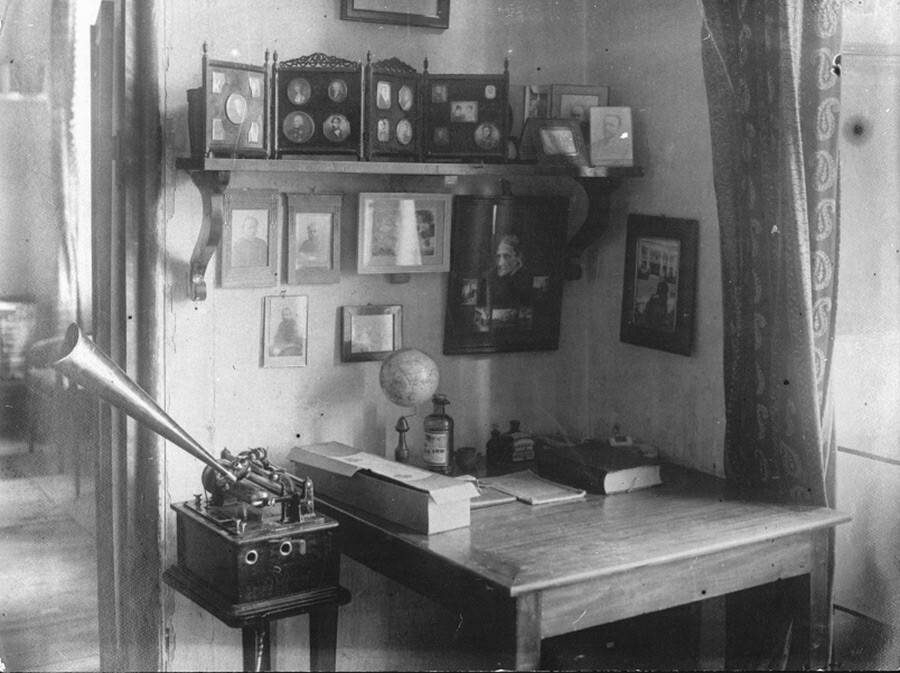 In 1908, inventor Thomas Edison sent Tolstoy a phonograph as a gift. The writer was eager to dictate short sayings and letters. At first, he recorded everything, but then he realized that the innovation should not be abused and decided to leave only wise sayings.

In the fall of 1909, representatives of the Graphophone company recorded Tolstoy's voice in Russian, English, French and German. Listen to Tolstoy speaking English, here.

Tolstoy also recorded tales for children. You can listen to them at tolstoy.ru

A record of the writer’s address to the peasant children of Yasnaya Polyana’s school, which he organized, is also widely known.

A gramophone was brought to Yasnaya Polyana even earlier, in 1903. The writer was very fond of music - the piano was always played in his house, and he also adored listening to the balalaika and gypsy singing. With the gramophone Tolstoy was offered to listen to Beethoven, Chopin, Tchaikovsky, arias from operas, and violin trios. 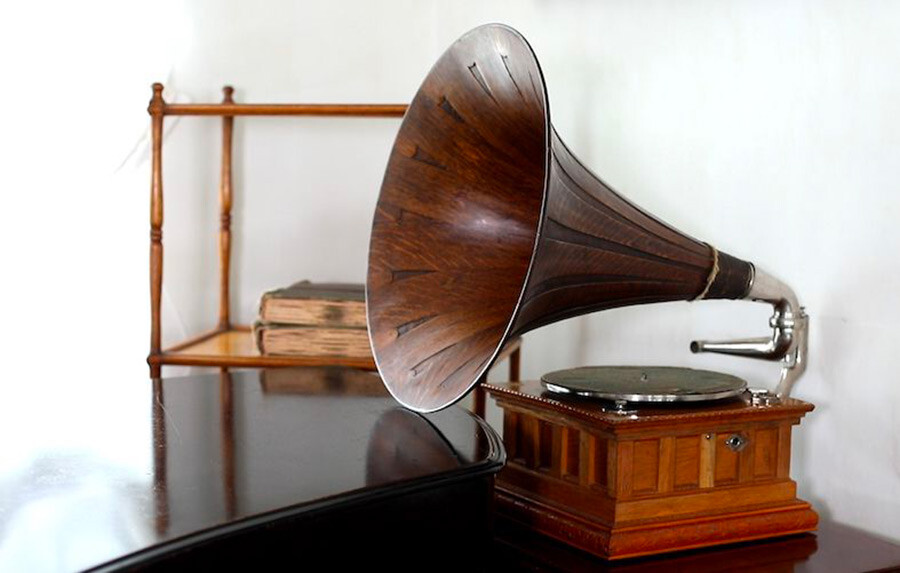 A gramophone of the early 1910s

According to the recollections of those present, he frowned and repeated "hmm" for a long time, but when his favorite Russian dance song, Po ilutse mostovoy (“Along the bridge street”) played, his eyes sparkled, his leg began to twitch to the music, and he uttered: Ишь ты! (Ish ty) - “Yikes!”or “Wow”

Railroads and other innovations

The train is no accidental ‘character’ in Anna Karenina. The most important episodes, such as Anna meeting with Vronsky and her suicide, are connected directly with the railroad. Thus, Tolstoy passes judgement - yes, it is progress and convenience, but also an instrument of murder.

Under the wheels of a train, even at the beginning of the novel, a random man dies. By the way, Anna’s suicide was inspired by events from real life - a girl who lived near Yasnaya Polyana threw herself under the train, and this deeply shocked the writer. 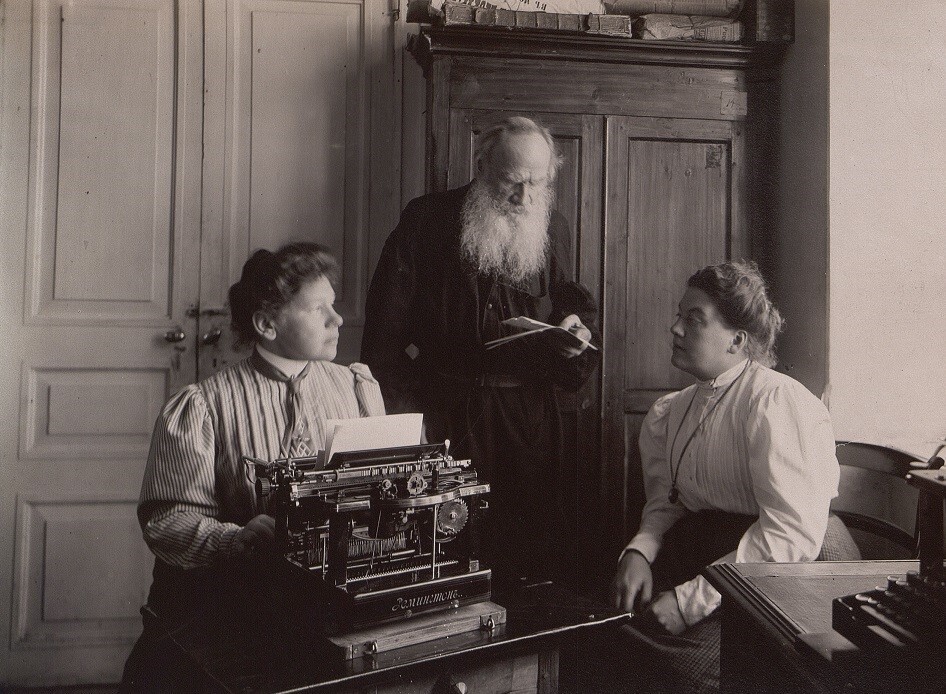 The death of people, whether through the will or the fault of progress, worried Tolstoy. “Electric lights and telephones and exhibitions are excellent, <...> but they may all go to perdition, and not they alone, but the railways, and all the factory-made chintz stuffs and cloths in the world, if to produce them it is necessary that ninety-nine per cent of the people should remain in slavery and perish by the thousands in factories needed for the production of these articles,” he wrote in “The Slavery of Our Times” (1890).

The main philosophical concept of Tolstoy (and his followers) declared "Non-Resistance to Evil by Force". The writer was very concerned about violence, and for all his interest in progress and technical innovations, he believed that the death of even one person is not worth any electricity or any other advantage of civilization.

“If, in order that London or Petersburg may be lighted by electricity, or in order to construct exhibition buildings, or in order that there may be beautiful paints, or in order to weave beautiful stuffs quickly and abundantly, it is necessary that even a very few lives should be destroyed, or ruined, or shortened, and statistics show us how many are destroyed, then let London or Petersburg rather be lit by gas or oil; let there rather be no exhibition, no paints, or materials, only let there be no slavery, and no destruction of human lives resulting from it,” he wrote in the same article.

Ironically, Tolstoy himself died near the railroad - one night he fled his home on a train, but became seriously ill on route. As a result, he spent his last days with amnesia in the house of the station master at the small station of Astapovo.

Read more about how Tolstoy spent the final days of his life, here.

“Tolstoy and Progress” exhibition (link in Russian) is held at the State L.N. Tolstoy Museum in Moscow until August 14, 2022.