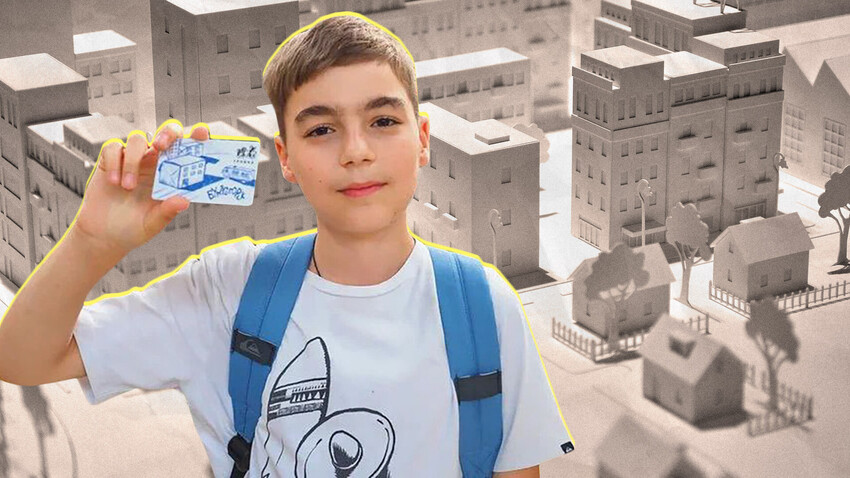 Russia Beyond (Photo: Moscow Department of Transportation; Legion Media)
Russia’s fastest-growing town is run by an 11-year-old boy… wait, what?!

Life in Bumagogorsk is in full swing. Recently, a ‘Metro’ shopping center, the first bank and a bridge across the river were opened there, while a new residential building was put up in just 24 hours. Last week, the town acquired a concert hall, a kindergarten, a TV tower and a garden. Resident Yelena won a competition for the best crab salad and resident Sergei was fastest in a pasta-eating competition. Forty of the town’s residents suffering from Covid have been successfully treated in the local hospital (how do they all fit into the town’s only two residential buildings?).

The town has been growing so fast that in just a week it became a separate country called ‘Bumagogoria’. Initially, it joined the Union of Paper Towns (UPT), but its “members used a lot of bad language and posted intimate pictures”, so it was decided to leave the organization. Wait… union of what towns?

Sorry, we forgot to tell you that Bumagogorsk is a three-dimensional model of an ordinary Russian town made of paper and cardboard [‘bumaga’ in Russian means ‘paper’ - ed.] by an 11-year-old boy named Matvey from Nizhny Novgorod. But life in the non-existent town is being followed closely by major Russian brands which are perfectly real - from Yandex and VKontakte to restaurant chains and the Moscow Metro. And the town’s popularity has grown so fast that real Russians have started looking for flights there. The Aviasales air ticket aggregator was even forced to tweet: “For heaven’s sake, Bumagogorsk is a town that doesn’t exist and we don’t have tickets to go there. Let’s get over it and get on with our lives as best we can.”

To go with the town, on July 11, Matvey set up two Telegram channels: On one, he publishes city news and, on the other, Bumagogorsk cinema listings.

“PEACE TO THE WORLD! Mayor cancels construction of a military base!”

“Please do not flush paper into the pipes!!!”

Initially, the news channel had just 19 subscribers, but the boy’s elder sister posted a tweet about her brother’s brainchild in her microblog and it went viral and attracted over 3,000 subscribers in one day (more than 25,000 currently follow the channel). The media covered the paper town story, after which businesses - very real businesses - poured into Bumagogorsk.

‘Yandex’ donated miniature taxis and models of houses to Bumagogorsk, while the Moscow transport department created paper models of its trains. The ‘Chitai Gorod’ bookshop chain opened a shop in the little town. The ‘VkusVill’ and ‘Metro’ retailers did the same. Meanwhile, Alfa-Bank, one of Russia’s biggest banks, and the ‘Tanuki’ restaurant chain have also “opened” in the town.

Even St. Petersburg’s ITMO University decided to collaborate with Bumagogorsk: “A team made up of members of the Physics Faculty and experts from Bumagogorsk has managed to develop a unique device with which paper particles can be accelerated to extreme speeds. The technology is simple to produce and accessible to all. The accelerator can be used to dismantle paper buildings and to build paper art objects.”

Matvey has been invited to the VKontakte offices in St. Petersburg, where a competition was announced among designers for the best game about Bumagogorsk.

Not all companies are allowed into Bumagogorsk, however. For instance, ‘Delivery Club’ sent an official letter to the mayor, but Matvey’s sister Maria replied with a reminder of the need to ensure appropriate working conditions for couriers (there is a widely-held view among Twitter users that Delivery Club exploits its workers).

Fame also has its downsides. The former town, now a whole country, has attracted fake accounts and people online are even talking of child exploitation for the sake of brand promotion.

“Heeeey capitalism and using a child to promote brands”

And yet, many people have written of their wish to move to the paper state, which has become a symbol of kindness, tranquility and children’s fantasies, where everything ends well.

“Darling, pack your things we are emigrating from Tbilisi to Bumagogorsk, because they have a VkusVill”

“Well, I was only out for half a day and now everyone’s moving to somewhere called Bumagogorsk”

“Sorry, can’t talk, am flying to Bumagogorsk. Will write when I get there”